The Different Roles in Charge of Beta Testing

A few months ago, we conducted a survey of professionals from over 260 companies to gain a better understanding of the customer validation industry. While all of the respondents played some role in their company’s beta program, 50% of them said they are directly involved with managing the actual testing.

To get a better understanding of the range of people tasked with managing these tests, we asked the respondents what job titles they hold. Surprisingly, for those who are either directly involved with collecting pre-release customer feedback or manage the team that is directly involved, more than 170 job titles were reported.

Here are a few of the titles held by those who manage or run the beta tests at their companies: 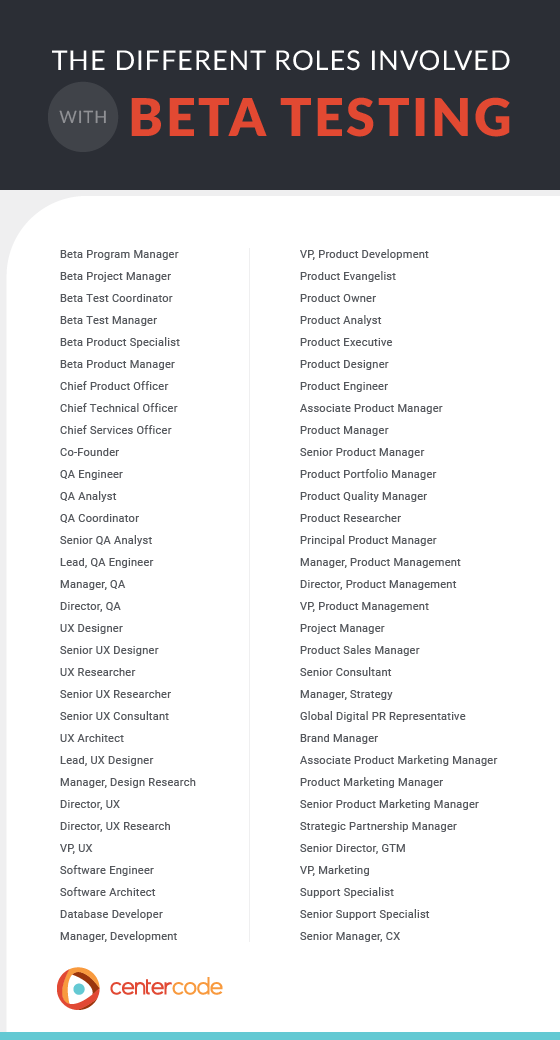 As expected, many of these titles fall within Product Management. However, many also fall under the Engineering, Marketing, QA, and UX departments as well. With everyone from CTOs and software architects to brand managers and support specialists involved with beta testing, this diversity can create an environment where a wide variety of competing objectives, milestones, and opinions strain against each other.

Further complicating the situation is that, while 38% of the respondents said they’re tasked with running customer validation tests as part of their job, only 12% manage the tests as their primary responsibility, meaning that only a small proportion of companies have teams or roles devoted to just their customer validation program. For the rest, who are in charge of running beta tests as only one part of their job, they are also required to juggle their various other responsibilities, as well as the needs of other stakeholders involved with the tests.

In fact, according to the survey results, most of these respondents said that though they see the significant opportunity and value in beta testing, they are largely unhappy with the effectiveness of their current beta programs. Tellingly, results show that the biggest challenges they face include having sufficient time and personal bandwidth to run the tests.

With those in charge of running the tests also wearing other hats within their companies, and when you have so many voices and priorities pulling at the seams, it becomes much more difficult to ensure that you’re making the most of your customer validation program. We’ve seen the most effective tests come from companies that dedicate specific people for these kinds of testing, allowing them to focus on continually building and perfecting their customer validation processes.

Customer validation is a critical stage of the product development lifecycle. The data from these tests are required for you and other stakeholders to make important product decisions that will determine the success of the product. We’ve already spoken about the fragmentation regarding the terminology used for this kind of testing and the need for standardization across the industry. The diversity in who’s running these tests further illustrates the need for industry-wide standards for running these kinds of tests in order to be able to successfully unlock the full potential of customer validation.

To dive deeper into the current state of the customer validation industry, check out the Centercode Beta Testing Industry Survey Report 2016.

Is My Product Ready for Beta Testing?

The task of beta testing a product can land on many different peoples’ desks within a company. The objectives of a beta test can vary depending on the role of the person running it. For example, a marketing manager may focus on the target market’s opinions on specific features, while a usability engineer may focus […]