How Technology Drives the Evolution of Beta Testing

We may associate the idea of beta testing with Google, Microsoft, video games, and other tech with roots in the late 20th century, but IBM cemented “beta” as far back as the 1950s. The Director of Betabound, Brad Day, wrote about the history of beta. To paraphrase him: IBM referred to testing feature complete products as “B” testing (in contrast to testing theories and ideas, or “A” testing). Those terms evolved into what we know today as “alpha” and “beta.”

The dynamic between alpha as working out the kinks and beta as its live environment testing counterpart mirrors our modern understanding of those tests. But the industry has since expanded and refined its concept of beta into a catch-all term that loosely means “validating a product before release.”

The Many Faces of Beta Testing

Beta testing is common in product development, but there’s a lot of variation in how companies actually do it. We’ll start with what they call it. An industry survey revealed over 90 names for pre-release testing. 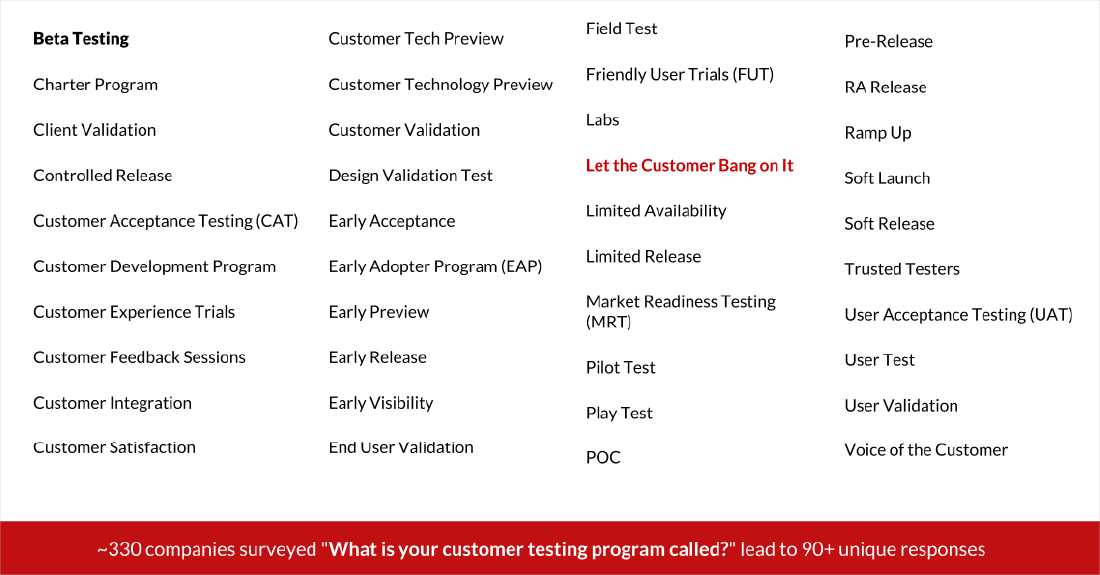 Then there’s the ways test managers run beta projects. Different teams perform beta testing in different ways and at different stages: in live environments and labs; with or without actual customers; over weeks or over days; using a feature-complete product or a prototype.

How does your team perform beta tests? Customers or an internal team? Lab or live environment? When does it typically happen? Tell us in the comments!

Finally, there’s what it means to be “in beta.” Companies like Google use beta labels to showcase their commitment to constant iteration. At the same time, many companies and customers alike see a beta version as a buggy or unreliable product.

Our own in-house research reveals an attitude that’s closer to the term coined by IBM. Beta testing is “the process of subjecting a product to testing by real customers in their real environment before its release.” That hasn’t changed much in almost 60 years.

But you know what has changed? Technology.

Developing Tech, Past and Present

It’s not only the size of products that have changed in the past few decades. With smart products and cloud-based software in almost every home and office in the US, it’s easy to see the strides tech has made in little over a decade.

Products have gone from siloed to interconnected, from niche popularity in tech-savvy markets to a mainstream audience, and from slow release cycles to constant iteration. This goes hand in hand with product development, which has also changed dramatically in both speed and execution.

Take a cassette player. You have three major compatibility concerns: the input, the play deck, and the batteries. A 3.5 mm jack for headphones, your standard cassette, and AA batteries. Every company and every consumer uses these universal standards. It’s analog, so there’s no need for a software component.

Now imagine today’s equivalent – a music streaming platform. You’ll have to develop an app for at least two operating systems: Android and iOS. Each one will have its own development team, who in turn will work with corresponding devices like mobile phones and tablets. Both apps will need to operate seamlessly with the existing versions of those devices. They’ll also need to work with any foreseeable updates.

Then there’s the web app and its compatibility with different browsers. There’s internet speed and connection quality to consider. Not to mention Bluetooth and speaker compatibility, file types, audio quality, codecs. We haven’t even gotten to the interface yet.

You get the idea – modern technology is complex. Product development is, by consequence, complex. That’s why it’s surprising to see many companies testing modern products with outdated beta testing practices. Technology has evolved. Given the need for organizations to validate new products with their broadening customer base, testing methodologies need to evolve as well.

Why Beta is Evolving

It’s not that the concept of beta testing is outdated. On the contrary: the increase in product sophistication makes it more important than ever. But with the enormous scope of modern product development, many teams find their pre-release testing processes don’t offer thorough feature coverage or a high enough return on investment.

There are many reasons why beta testing might not return the results they’re capable of. Here are four of the most common challenges we’ve encountered.

1. No one has a clear idea of what beta testing has, can, or should achieve.

Failing to consistently track either the metrics or the footprint of beta testing once a project has concluded makes it hard to pinpoint how effective it is and where there’s room for improvement.

2. Beta tests are looking at too many product areas or features at once.

A lack of clear goals and processes makes it difficult to secure feedback on the features that matter most. Trying to cram too many task scenarios into a single test often leads to spotty, inconclusive feedback.

3. Beta tests are running on a crunched schedule.

Many product schedules don’t account for delays earlier in development that impact the time dedicated to beta testing. Many test managers don’t have enough time to pull in feedback, or else the results come in too late to implement before release.

There are many factors that affect the flow of feedback: the length of the test, the quality of the tester pool, and how often you communicate with testers, to name a few. Any of these factors can inhibit tester participation and the volume of incoming user input.

Fast-paced product evolution demands thorough but streamlined methods for delivering useful insights from pre-release tests. It’s not enough to take the same tactics used in the past. It takes updated processes, smarter tools, tested techniques, and best practices to collect customer data and turn it into product refinements that pack a punch.

This is at the heart of why Centercode exists: to help people developing products combat those challenges through Customer Validation.

Want to learn more about modern practices for collecting customer feedback? Read about the basics of Customer Validation and unlocking the potential of beta testing in our new ebook.

Get The Customer Validation in 20 Minutes Ebook

Is My Product Ready for Beta Testing?

The task of beta testing a product can land on many different peoples’ desks within a company. The objectives of a beta test can vary depending on the role of the person running it. For example, a marketing manager may focus on the target market’s opinions on specific features, while a usability engineer may focus […]