The Evolution of the Tech Consumer

Before smartphones, wireless internet, and connected products became the norm in American households, interest in buying and using these products was a lot more niche. As more people slowly gained access to the internet, the 80s and 90s saw the rise of the “tech enthusiast” — people with a great love for computers, electronics, video games, and other forms of (then) advanced technology.

Computer science had been a field of study since the 1940s, but Hollywood’s most iconic depictions of the “techno geek” came in the 80s and 90s. Movies like 1982’s Tron and 1983’s WarGames, and characters like the zany inventor Doc Brown in the Back to the Future trilogy cemented the image of tech enthusiasts as nerdy, socially awkward, and/or slightly eccentric hackers, too smart for their own good, and almost always male (a noteworthy exception: Lex Murphy from 1993’s Jurassic Park).

But those Hollywood depictions are just caricatures of the real thing. Steve Wozniak aside, the real tech “geeks” of yesterday weren’t all hackers and IT guys. It’s pretty simple: The primary consumers of advanced tech were people who just really liked advanced tech. They were more like hobbyists than mainstream consumers; today, we’d distinguish them as “early adopters.” Here’s a quick list of their defining characteristics.

They love tech for tech’s sake.

The most defining characteristic of hi-tech enthusiasts is…well, how much they love technology.

Tech isn’t just about the promise of convenience (though the dream of the fully automated home was definitely part of it). Collecting, tinkering with, and using tech is an activity on its own; it’s something they make time for, like a hobby. Even if it isn’t necessarily useful, it’s still really, really cool.

Back in the day, adoption of sophisticated, sometimes complicated technology was a lot more niche. This isn’t to say that user experience or ease of setup wasn’t important back then. But for enthusiasts, easy setup is less integral to their overall enjoyment and ability to use a product. That’s also, in part, because…

Because they love technology for its own sake, enthusiasts tend to be better at troubleshooting. Just like someone who bakes all the time can make an educated guess about why their bread didn’t rise, a tendency to tinker and investigate makes enthusiasts better at understanding the individual parts, identifying what’s wrong, and coming up with their own solutions to fix it.

Back when enthusiasts were the primary consumers of hi-tech devices, the stakes for launching perfected products were lower because these consumers were less likely to clog support lines or return products they “couldn’t figure out.” Instead, they’d play around on their own or discuss solutions online with similarly enthusiastic users.

They want the “latest and greatest.”

Faster PC gaming setup? Absolutely. Speakers with the most accurate sound reproduction? Bring it on. Excitement about the possibilities of technology (rather than the real-world outcomes) makes tech enthusiasts hungry for new innovation. As early adopters, they’re just as interested in the evolution of a product as the finished product. They’re also more likely to take risks on new tech just to be the first to check it out.

The market for digital electronics, computers, and smart home automation has exploded into a mainstream, highly competitive industry.

Technology is more advanced today than it’s ever been. But unlike decades past, where the most prominent users of hi-tech were enthusiasts and hobbyists, the vast majority of Americans today own very smart tech. As of 2019, 78% of Americans own a smartphone and 65% have a smart device in their home. Super smart technology is wildly popular.

Everyone uses it — from engineers and data scientists to kindergarten teachers and kindergarteners — and consequently, the span of demographics and technical know-how is vast.

While the average consumer in 2021 is far more tech-savvy than the average consumer two or three decades ago, many of us still don’t have the patience or passion of early adopters in the 90s. Let’s look at today’s users and how these differences between then and now are shaping the evolution of technology.

They see tech as a means to an end.

Mainstream users have a different relationship with technology than early adopters. Instead of loving tech for its own sake, they’re more interested in making their lives easier — whether that solution is one that’s tech-driven or not.

A recent survey of Betabound users revealed that functionality is the most important buying factor for phones, laptops, and speakers, while compatibility is most critical for smart home devices. 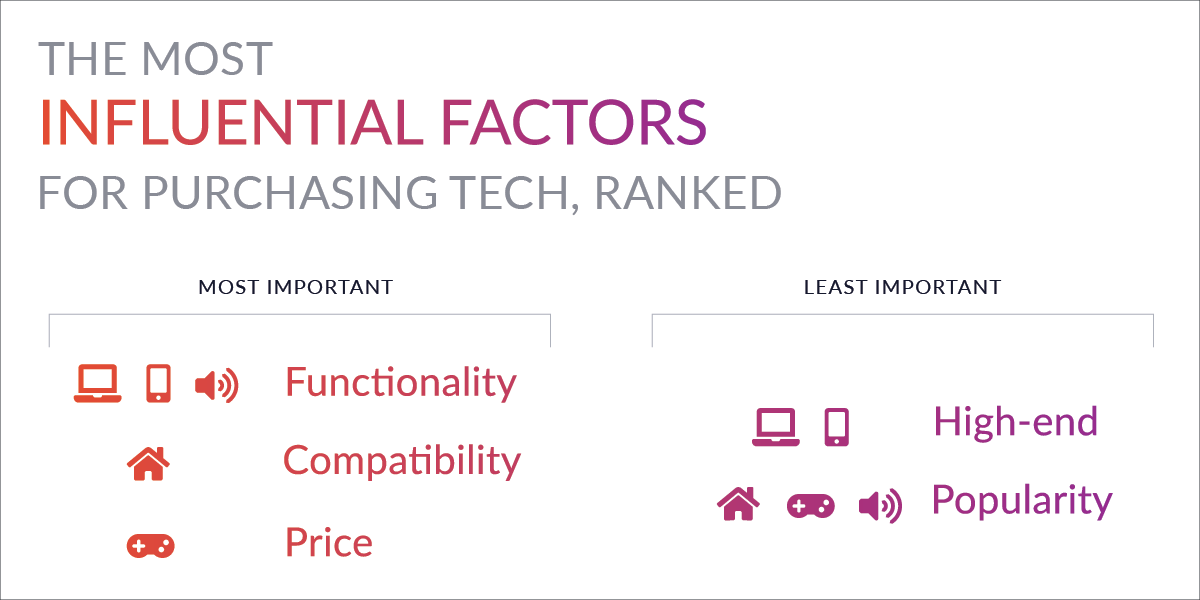 A mainstream user might buy a smart toothbrush because it promises cleaner teeth, for example, not because they can track the average duration of each brushing session on their phones.

The enormous variety of people who buy and use tech today makes the consumer pool less technical by default, as more people without technical backgrounds or interests bring sophisticated technology into their living spaces.

Less technical users may be willing to trade in-depth functionality or customization for quick setup and ease of use. They might get frustrated more quickly when an interface isn’t user-friendly, and they may need more support — which means extra costs for the device maker if that aspect of user experience isn’t ironed out before release. This wide pool of consumers also means hundreds upon thousands of use cases, as the variety of user behaviors, geographic locations, and technographic environments steadily increases.

This doesn’t mean that technical users are more valuable as a market force than mainstream consumers, or vice versa. It’s critically important for tech companies to balance the needs of their diverse user pools and take as much customer insight into account as they possibly can.

How are tech leaders staying in sync with all their customers?

Easy: They’re listening to them.

They know that technology, even advanced technology, needs to be accessible to be popular. To keep these devices both functional and easy to use, today’s companies are constantly iterating and continuously testing products to stay at the top of their game.

Tech makers put enormous emphasis on rigorous pre-release testing and feedback programs to make their products work for everyone. That means an obsessive focus on improving user satisfaction, increasing quality, and making it easier for mainstream customers to use their products without sacrificing the sophistication that early adopters love.

Centercode has been on the frontlines of customer testing for two decades, and in that time, we’ve connected tech makers to their markets as advanced technology has evolved from community interest to a global force. See how we’ve evolved our customer testing practices to suit consumers globally and tech companies in every industry in our ebook, Making Good Tech Great.

See the Industry Use Cases in Making Good Tech Great

In early June of 2020, tech giant IBM announced they will stop offering facial recognition software until further anti-bias testing has been conducted. “IBM firmly opposes and will not condone the uses of any technology, including facial recognition technology offered by other vendors, for mass surveillance, racial profiling, [or] violations of basic human rights and […]

How Technology Drives the Evolution of Beta Testing

We may associate the idea of beta testing with Google, Microsoft, video games, and other tech with roots in the late 20th century, but IBM cemented “beta” as far back as the 1950s. The Director of Betabound, Brad Day, wrote about the history of beta. To paraphrase him: IBM referred to testing feature complete products […]

How Customer Insights Are Shaping Tech for 2021

We’ve often described modern technology as highly sophisticated, highly connected, and continuously iterative. The rapid-fire changes of 2020 didn’t change that — in fact, it brought those qualities into sharper relief. It highlighted both the reliability of technology and its shortcomings. 2021 will be shaped by companies that have the best understanding of these nuances […]